If you can help, we need donations.

Prayer for Grace for our Country

Dear Father united to Jesus in the Holy Sacrifice of the Mass, the Sacrifice of Calvary sacramentally made present, celebrated around the world, in the Holy Spirit. We offer up all we do united to the Mass. We unite in one mind and one heart as members of the mystical body of Christ, with Christ our head in the pure and holy Hearts of Jesus and Mary, through the powerful intercession of Mary with all the angels and saints and souls in purgatory, and we beg for the saving grace, for our country, the United States. Please help us. We further pray for unity to always do the will of God in love. We spread the Blood of Jesus on the leaders and people of the United States and cast the devil into hell. We consecrate our country to the Sacred Heart and Immaculate Heart and all our dioceses, and beg for an outpouring of the Holy Spirit. God help us. We pray for our families, the priests, the Church and the world. In the Name of Jesus please hear us, we pray. We pray for our president and leaders. We pray that we are united as one nation under God to work together in love as God wants.

A Prayer for Intimacy with the Lamb, the Bridegroom of the Soul

Oh Lamb of God, Who take away the sins of the world, come and act on my soul most intimately. I surrender myself, as I ask for the grace to let go, to just be as I exist in You and You act most intimately on my soul. You are the Initiator. I am the soul waiting Your favors as You act in me. I love You. I adore You. I worship You. Come and possess my soul with Your Divine Grace, as I experience You most intimately.

I was at Our Lady's House for the Junior Shepherds of Christ meeting. I cannot remember any great apparition of Mary in the Sorrowful Mother statue since August 12 and 13, 1996. She appeared all night and two times on August 13, 1996, once right before I went to the rosary at Tom's farm about 5:30 p.m. (the night John was there and St. Michael came out of the water). Mary comes when you least expect her.

As we began the rosary I began to see Mary, covered with a mist. Then I saw light around her. She got bigger than the statue, her face softened to that of the most beautiful woman—the same as the picture I took on Mother's Day 1995 when she told me to buy film and take her picture. She was all adorned in light. She changed, around her head and she became a young, beautiful girl. She then changed into a lady of immense light, all white, beautiful and young. I wanted to cry in awe looking at her. I wanted to stop the rosary and just see the apparition, but I continued to speak as she spoke through me.

On October 5, 1996 I saw her at Immaculata in the grotto. She had told me earlier that day she was Our Lady of the Rosary and gave a very strong message.

I do not recall seeing her in an apparition in the Sorrowful Mother's statue since August 13, 1996.

She was clearly, clearly, "Our Lady of Fatima" - LIVE. I saw her. I am in awe and wanted more, it was so beautiful!

She may have appeared as Our Lady of Fatima the first time. She was covered with the greatest light—a light as from a fire and all white, but on July 5, 1994 when she first appeared,

I did not know what Our Lady of Fatima looked like.

I know tonight she was like every statue I have ever seen of Our Lady of Fatima, glistening, and all white. She had beads or embroidery around her cloak. I know she looked like the Lady of Fatima statues but LIVE.

Every time we sang A Song From Jesus she would shine with the brightest light and her face would fill with the greatest joy.

There was no place for Jesus to be born—He was born the Light of the World in a stable in Bethlehem and the brightest star shone above His bed.

This rosary on Fatima needs to circulate to the youth. Mary appeared to tell us to tell the youth this rosary. It does not have any message from Mary, only information from her for the youth.

Mary's message for the youth: a rosary on Fatima—as she appeared to deliver it.

This is a great comfort to me. She appeared, Our Lady of Fatima, to tell us that this is truly a major part of the completion of the Fatima message.

At one point I saw a little blond hair sticking out from under her veil at the top of her head.

The room was a brightly lighted hallway with big balls of light that came down from the ceiling.

She was adorned in light, brighter than the hallway, light as bright as seven suns, the Lady of Light.

It is in her womb we see the light, the light of knowing God through the power of the Holy Spirit.

Our heavenly Mother Mary, gave messages associated with the major Fatima apparitions. She told Jacinta, one of the three visionaries at Fatima...

The Birth of Jesus

The Presentation of Jesus in the Temple

The Finding of Jesus in the Temple

"You have seen Hell, where the souls of poor sinners go. To save them, God wishes to establish, in the world, devotion to my Immaculate Heart. If people do what I tell you, many souls will be saved and there will be peace."31

We must obey Mary. The plan is the same plan today. We must reach the youth of this world with the consecration We must tell them to give their hearts to Jesus and Mary. 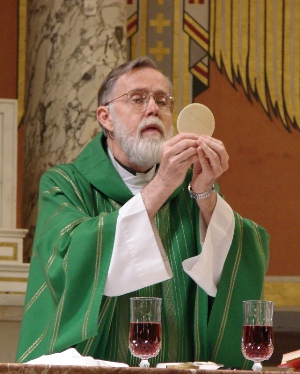 Inspiring Homilist & Author
Fr. Joseph Robinson has dedicated his life to serving Christ and the Church for over 40 years.

Guiding Light — The Word Alive in Our Hearts. — Cycle B    Homilies by the Reverend Joe Robinson given at St. Boniface Church in Cincinnati, Ohio. It is a tremendous honor Fr. Joe has allowed us to share these great gifts with you – for greater holiness and knowing more and more about God. $10

Guiding Light — The Soul Who Could. — Cycle A    Homilies by the Reverend Joe Robinson given at St. Boniface Church in Cincinnati, Ohio.  $10

Here are all the products in this category:

Books written by the founder of Shepherds of Christ Ministries

R. Pray for These Things

1) Pray for the Pope & hierarchy to help us start prayer chapters.
2) Pray for Special people.


3) Pray for the priests, the Church and the world!
4) Pray for the spread of prayer chapters,
also for the spread of priests doing prayer chapters.
5) Pray for the spread of Blue Books.
6) People going to Florida and China.
7) Vocations to all 7 categories.
8) Pray for spread of Consecration and Rosary.
9) Pray for pope helping us.
10) Pray for Jeff.
11) Pray for the country
12) All intentions on my list, Jerry's list.
13) Priests getting Fr. Joe's book.
14) Pray for Fr. Joe's new book, cover & funds for printing & postage.
15) Donors and members and their families.
16) Healing of the Family tree.
17) Pray for the Corona Virus to go away
18) All who asked us to pray for them.
19) All we promised to pray for.
20) Rita, Doris, Sheila, Jerry, Sanja, Fr. Mike, Louie, Laverne,
Fr. Joe, all priests helping us, Ed, Jimmy, Mary,
Carol R., a special couple, Rosie & all involved.
21) All of our families.
22) Funds and insurance.
23) All of our houses.
24) In thanksgiving for gifts, graces, & blessings received.
25) Spread the Blood of Jesus on all of us here.
26) Consecrate all hearts.
27) Cast the devil out of all of us here and all in Movement.

Copyright © 2021 Shepherds of Christ.
Rights for non–commercial reproduction granted:
May be copied in its entirety, but neither re–typed nor edited.
Translations are welcome but they must be reviewed for moral and
theological accuracy by a source approved by Shepherds of Christ Ministries
before any distribution takes place. Please contact us for more information.